The new century brought both significant changes and challenges to the Locals.

The long-planned merger between Locals 5 and 167 finally happened in early 2000. But economic challenges lingered after the amalgamation of greater Hamilton. And a global financial crisis that began in late 2007, triggered by the collapse of the mortgage and housing markets in the United States, began dragging Canada and much of the world into a recession.

“Local 5’s membership was shrinking. I don’t know if they approached our executive, or vice versa. But it was the only way to boost both Locals.”

Although the Locals had often worked together at the bargaining table in the past, the final push toward merger was the amalgamation. The province downloaded a number of key services, such as education and ambulance services. Workers in these sectors now fell under the city’s jurisdiction. Because of this important change, the Locals began to finally begin merging their memberships. 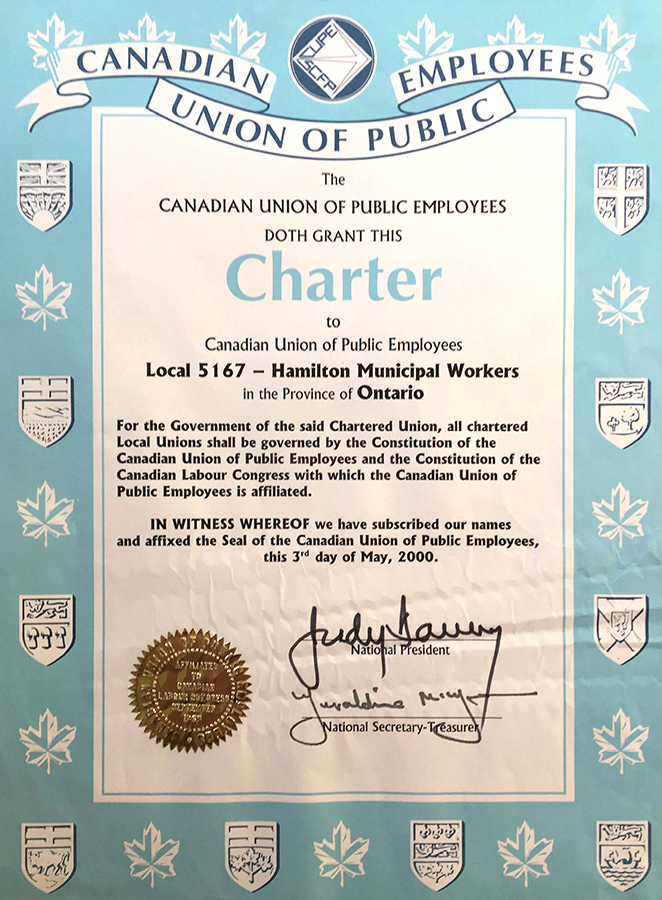 “The impetus for amalgamation was the Hamilton merger. CUPE realized at some point they’d have a representation vote amongst the different locals — 5, 167, the nurses, ATU, and OPSEU. So cooperation amongst those different locals had existed in the past, but in order to situate themselves well, it made more sense to amalgamate.”

Challenges: Bill 136 and the “Super Union”

The effects of amalgamation did not end in 2000. Through Bill 136, the Public Sector Transition Stability Act of 1997, the city’s 3,500 civic workers were forced into a representation vote. The Bill was an attempt by the province to create one massive union from the five that currently represented the city’s workers. Many school boards, hospitals, and municipalities across Ontario were also forced into these votes. As the Hamilton Spectator reported in September 2002, “Five unions are fighting it out for the loyalty and dues of 3,500 Hamilton municipal workers in what could be a hotly contested battle. The province’s labour board has ordered voting in November by civic workers to decide which union will bargain for them.”

Local 5167’s executive met with the other four civic unions to try to get ahead of the vote and work together on the best solution. But those talks quickly broke down.

Members began voting to decide on which union they wanted to represent them in late 2002. When the votes came in, the Amalgamated Transit Union (ATU) narrowly won: 1,260 votes to CUPE’s 1,217.

Although the Ontario Ministry of Labour oversaw the vote, it was clear that something had gone wrong. Local 5167 disputed the voting process and demanded another vote after reports about irregularities came to light. These included charges of double-voting and some members’ failure to show proper identification.

At first, the ministry and city officials resisted the calls for a new vote, although they did agree that there had been serious irregularities. Instead, the ministry asked the unions if they would like to settle things without another vote, and the unions agreed.

In the end, after a long process of negotiation, the super-union idea died. Local 5167 kept all of its members and gained the ATU’s clerical positions and Local 772’s rink positions, too.

Al Peti describes how the representation vote brought the issue of member dissatisfaction to the Local’s leadership. 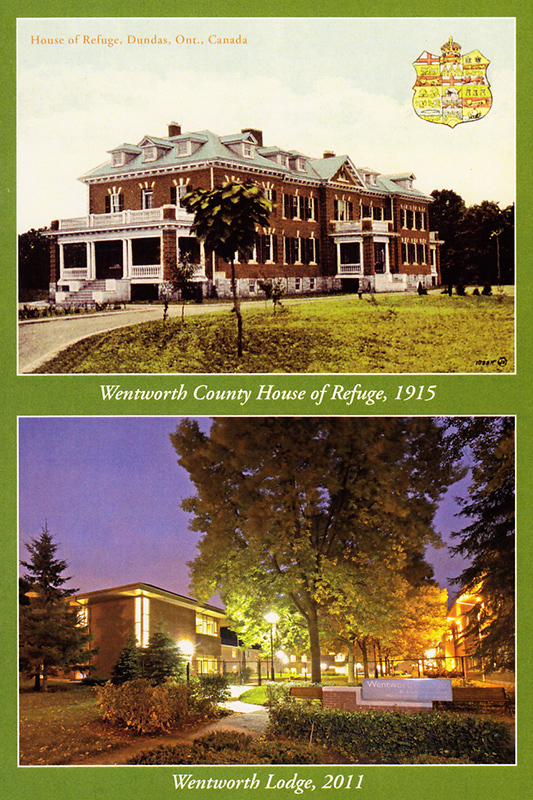 Although the new century brought challenges, it also brought a number of important wins for Local 5167.

In 2004, the Local led a coalition of citizens, environmentalists, and labour activists to take back control of Hamilton’s water and wastewater systems from the private companies that had run it since 1994. In that year, Hamilton became the first major city in Canada to contract out water and wastewater treatment. The ten-year experiment was marked by controversy, bankruptcy, and raw sewage spills.

By November, the Water Watch Coalition was successful in getting city council to reverse its decision and resume operating the city’s water systems.

Gus Oliveira talks about how Local 5 won the garbage contest.

In November 2012, the city of Hamilton launched a probe into some of its outside workers. It accused the workers of corruption and using city vehicles for personal use by selling asphalt out of the backs of trucks and dumping it in a private asphalt company yard while charging for full days’ work. Thirty-two workers were investigated, and 29 were fired.

The media reported the incident as a blatant case of fraud and time-stealing. But the real story was quite different.

The city had begun using a new asphalt-recycling machine. The new machine took old asphalt off the roads and refashioned new material out of it that could be used to patch roads, instead of using new asphalt. But the workers quickly discovered that this recycled material did not work as well as the new asphalt. As a result, crews were regularly sent to purchase new asphalt from the plant.

In the meantime, the city had set up a task force to figure out why it had not seen any cost savings after buying the machine. The insinuation was that a “kick-back” scheme was going on: The workers were dumping the recycled asphalt, then buying it from the plant for payment.

In the end, the confusion, investigation, and terminations were devastating. The Local spent many years grieving the firings and demanding that the workers be rehired. Eventually, most of the fired workers were awarded their jobs back in mid-2015. But it was a long process of arbitration that included years of hearings. A second phase of hearings demanding damages was also launched following libelous comments by city councillors and the media.

As Local 5167 grew, it outgrew its office space on Hunter Street. In 2007, the Local’s executive began the process of buying its own office building. Three years later, it purchased a former car dealership at 818 King Street East in Hamilton, and set about doing significant renovations. The Local moved into its new offices in June 2010.

“We bought this building and converted it from a repair garage to an office building. We moved into it in June 2010. I would run back and forth between there and the GO station when I had the time to see what was happening and ask the contractors questions. There was lots of work to do because it had been a repair garage and before that, a car dealership, and so there were a lot of contaminants to clean up. But we ended up with a really great space.”

Paula Masys-Pollock talks about Local 5167’s presence in the community, and its engagement with members and the general public.

The Good Sheppard Centre is newly organized and becomes a sub-unit of Local 167 on December 19.

Local 5167 launches a successful campaign to stop the privatization of Wentworth Lodge.

Through Bill 136, the Public Sector Transition Stability Act of 1997, the city’s 3,500 civic workers are forced into a representation vote. It attempts to force Hamilton’s five unions, representing 3,500 garbage collectors, planners, clerks, bus drivers, public health nurses, operating engineers, and paramedics, into one giant Local. In the end, after a long process of negotiation, Local 5167 keeps all of its members and gains the ATU’s clerical positions as well.

Local 5167 leads a citizen campaign to take back control of Hamilton’s water and wastewater systems. The Water Watch Coalition is successful in getting city council to reverse its decision and resume operating the city’s water systems.

Local 5167’s Executive Board passes a motion to include at least one Indigenous person and one person of colour on its executive.

Local 5167 sets up up a scholarship fund in the name of Carolyn Carter within Mohawk College. Ms. Carter was a long-time activist at the Local and within her workplace. The $1,000 bursary will be awarded each year to a student entering the Personal Support Worker Program at Mohawk.

The Local begins the process of buying its own office building.

The Local nominates Ed Thomas for the CUPE National Literacy Award “for his long commitment and advocacy in education and programs on literacy for employees within the City of Hamilton and internationally.”

A global financial crisis that began in late 2007, triggered by the collapse of the mortgage and housing markets in the United States, begins dragging Canada and much of the world into a recession.

The end of mandatory retirement at age 65 goes into effect in Ontario.

The Ontario government implements a wage-freeze policy for public-sector workers. One in four contracts reached after the March Budget contained no wage increases. Local 5167 successfully bargains a 3% increase for its members, however.

As the effects of the recession deepen, the Local grapples with a $170,000 deficit.

The Local buys a building at 818 King Street East in Hamilton. The new office, which used to be a car dealership and repair garge, comprises 5,300 square feet of space and ample parking.

The city of Hamilton conducts a probe into city workers, accusing them of corruption and using city vehicles for personal use by selling asphalt out of the backs of trucks and dumping it, while charging for full days’ work. Twenty-nine frontline workers are fired, and 32 are investigated. In the end, the Local spends years grieving the firings and demanding that the workers be rehired. Most are awarded their jobs back in mid-2015.

City Housing superintendents become a unit of Local 5167. During bargaining of its first collective agreement, the unit merged with the larger city unit.

The Local’s Executive Board is awarded the Hamilton/Burlington United Way Community Spirit Award.

The Local launches the “I Love DARTS” campaign in a bid to save the accessible transportation service.

The Local launches the “Time To Care” campaign to help raise awareness about the need for a four-hour daily care legislated standard for long-term care residents in the facilities where its members work.