The 1990s were a period of difficulty and upheaval. In 1991, a severe economic recession began. In 1990, Ontarians elected the province’s first NDP government, ushering in what many hoped would be a new, more progressive era.

A prolonged economic recession began. The unemployment rate reached a high of 11% by the middle of the decade. Manufacturing jobs disappeared as new technologies came online and NAFTA, the North American Free Trade Agreement, came into effect. By the end of the century, for example, Hamilton’s steel companies employed only 15,000 workers.

In 1991, as budget shortfalls piled up, the City of Hamilton cut 50 full-time jobs. In 1992, approximately 1,500 Local 5 and Local 167 members were temporarily laid off in an effort to force the unions to open their contracts and agree to concessions. But the unions never yielded. While non-union civic workers were forced to accept lengthy wage and benefit freezes throughout the ’90s and 2000s, CUPE members continued to enjoy annual increases. 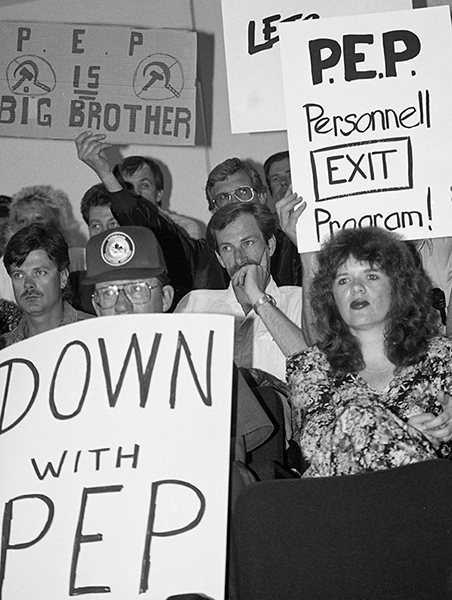 “You didn’t really work days. You worked your own job and union business was after hours. Unless you were going on a grievance, or during negotiations, then you’d be booked off. But other than that, it was all done after hours…. I was instrumental in getting a fulltime president’s job.” 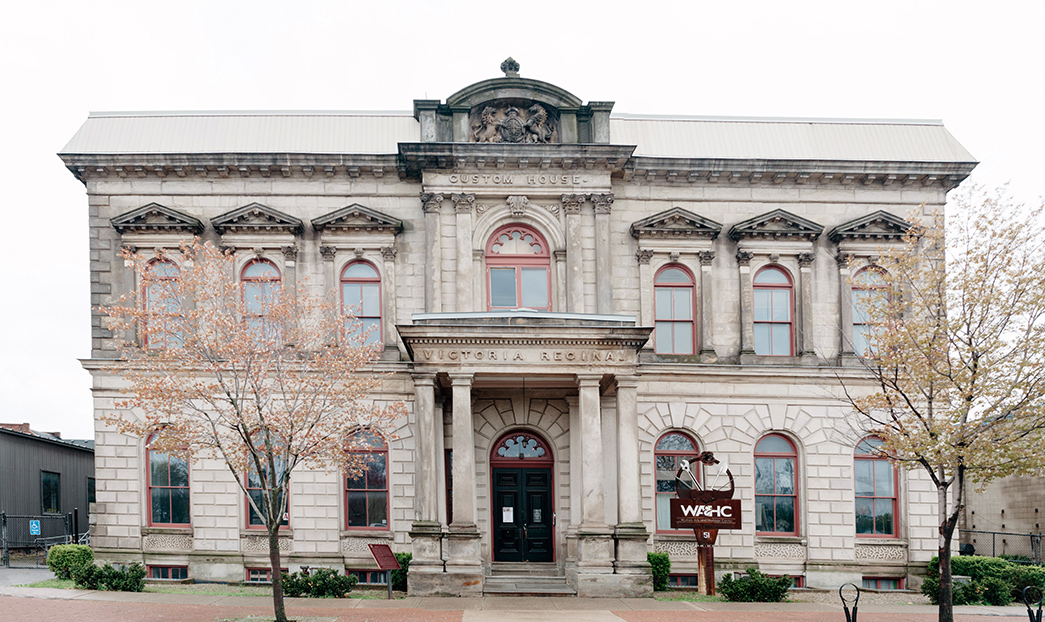 Workers Arts and Heritage Centre opened in 1996 and is dedicated to preserving and promoting the culture and history of working people in Canada, 2016. Courtesy of Kat Williams.

The Workers Arts and Heritage Centre

The Workers Arts and Heritage (WAHC) was conceived in the late 1980s by a dynamic group of labour historians, artists, and union and community activists, including members of Local 5 such as Ed Thomas, who gathered together to discuss the need for a place where workers’ history could be celebrated. In 1996, the Ontario Workers Arts and Heritage Centre purchased the historic Custom House on Stuart Street in the north end of Hamilton. Today, WAHC “aims to preserve, honour and promote the culture and history of all working people.… The contributions of working people — not only in Canadian history but worldwide — are showcased in art, exhibits, and performances.”

There were hopes that the new government would make working people’s concerns an important part of their agenda. But this would not happen.

Instead, in an attempt to deal with the effects of the recession, the new government introduced the Social Contract, which re-opened public-sector unions’ collective bargaining agreements and froze workers’ wages. Workers were forced to take 12 days of unpaid leave a year, which were dubbed “Rae Days” by many Ontarians.

The government had asked public sector unions to work with them to implement the cuts. When Ontario’s two largest unions, CUPE and the Ontario Public Service Employees Union (OPSEU) both boycotted the talks, the government decided to enact the initiative unilaterally.

In Hamilton, the city tried to deal with its own budget shortfall by laying off civic workers for 15 Fridays in 1993. The city also closed city hall for some of these Fridays.

By 1994, as the recession deepened, Hamilton civic workers experienced the largest temporary layoff in their history. Nine hundred workers were laid off for up to six weeks, and 64 full-time jobs were eliminated. 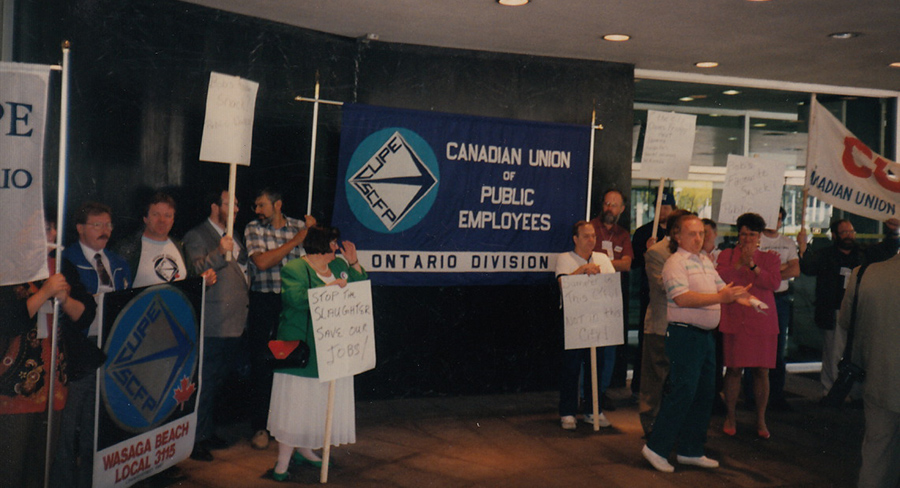 Peter Wickett talks about how the forced amalgamations of Hamilton and the downloading of services to the municipalities was the main impetus for the merger of Locals 5 and 167.

By the middle of the decade, things had turned from bad to worse. In 1995, a new government was elected in Ontario. Mike Harris’s Progressive Conservatives’ so-called Common Sense Revolution promised a more “corporate” approach to the public sector and public programs as a way to deal with the troubled economy.

The program was an attempt to cut $8 billion from the provincial operating budget. It axed 10,600 civil service jobs, slashed social assistance payments by one-fifth, created a workfare program for social assistance recipients, and tried to force the closure of dozens of hospitals and eliminate most school boards in the province.

In 1997, the government also decided to force municipalities to amalgamate. In Hamilton, the city and regions merged to become the Regional Municipality of Hamilton-Wentworth.

Vickie Houston describes how attending the Hamilton Day of Action in 1996 spurred her decision to become a labour activist. 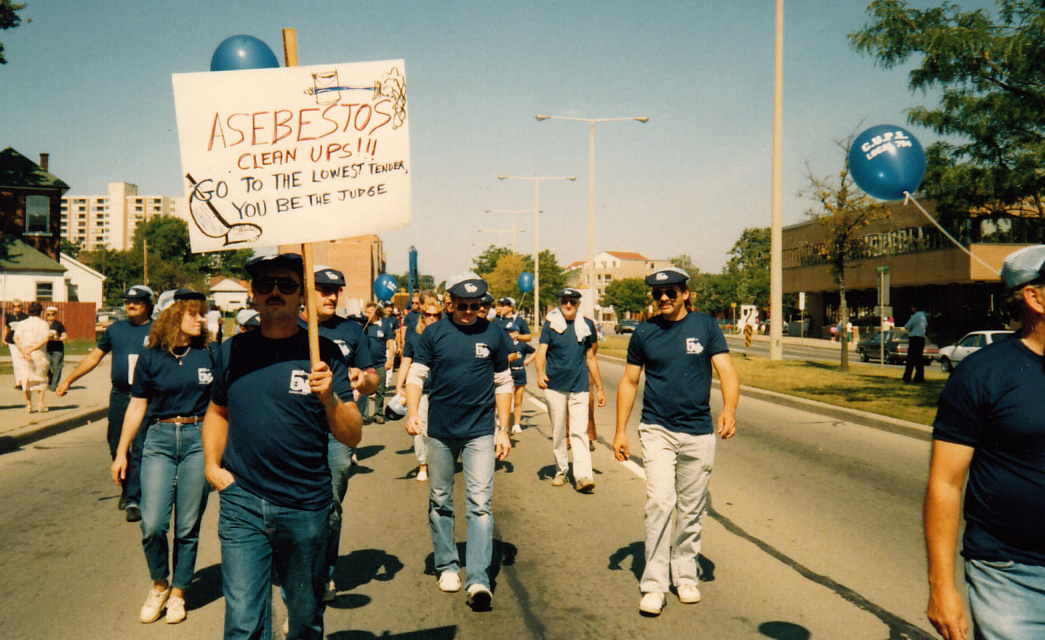 Losing Out, but Fighting Back

The 1990s was a difficult time for Hamilton’s civic workers. Management, along with some city councillors, repeatedly called for workers to accept significant cuts to their wages and benefits. But the Locals refused to back down.

Thwarted at the bargaining table, the city unilaterally imposed a series of regressive measures, including moves to make it more difficult for workers to use sick leave. This prompted large protests by workers. The city also tried to bring in welfare recipients and pay them at student rates, but the Locals moved to prevent this.

The Common Sense Revolution’s assault on workers and public services sparked massive demonstrations in 11 Ontario cities from 1995 to 1998. Many workers and unions took part in these Days of Action. In Hamilton, CUPE members set up picket lines at city hall, school board head offices, works yards, libraries, and social service offices. They also shut down local transit and impeded garbage collection. 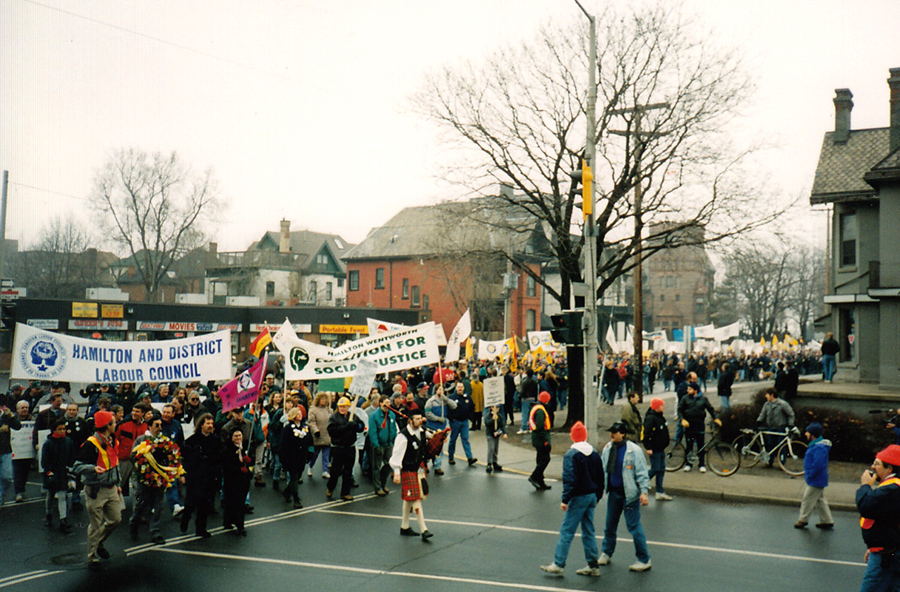 The Locals and their members were shaken and overwhelmed by the tough economic climate and the series of cutbacks they had been forced to endure. In November 1994, the Laborers’ International Union of North America (LIUNA) Local 837 took advantage of this vulnerability by attempting to raid Local 5 members. LIUNA managed to get 140 Local 5 members to sign membership cards.

The attempted raid was a wake-up call to Local 5’s leadership. Executive members fanned out to the various yards where workers had signed the cards and persuaded them to revoke the signed cards and stay in Local 5.

It was also a chance for the Local to reconnect with its members during a difficult period. Members blamed the union, it seemed, for what had happened to them during the Social Contract, and were frustrated about the backlog of grievances and the lack of communication from the executive as the Local dealt with the effects of the difficult economic climate.

In 1994, the City of Hamilton notified Local 5 that workers at the new Chedoke Twin Pad Arena would be required to work ten-hour shifts instead of the eight hours that were spelled out in the collective agreement. When Local 5 objected to the change, the city privatized the arena’s operations.

The Local sprung into action, meeting with the workers, getting them to sign union cards, and becoming certified as the bargaining agent. While this was happening, the new contractor defaulted on its payments to the city, and its contract was terminated. The facility was returned to the city, which hired most of the workers that had been brought on by the contractor.

By 1997, Local 5 comprised six different units: the City of Hamilton, the Region of Hamilton-Wentworth, Flamborough, Third Sector Recycling, the Hamilton Airport, and the Royal Botanical Gardens.

By 1998, Local 167 represented 1,600 members in nine bargaining units. Cutbacks and layoffs had taken a toll on the Local, but by the end of the decade it had begun to fight back and win back much of what it had lost.

The Local challenged the loss of merit increases over the 1990s and won a major victory at arbitration: more than 400 members were awarded back pay with interest. It also won back the vacation pay it had given up for some of its members at the beginning of the decade. Its finances began to recover as dues were raised to help eliminate a deep deficit. And two new strike-preparation committees, the Cross Sector Committee and the Strike Preparation Committee, were created to better coordinate job action moving forward.

The Local also approved, for the first time, a full-time position for its president, in January 1998.

“It was a very difficult and divisive time. Though we were coming together as one local, there was an undercurrent that worked against us. It wasn’t a pleasant period. The impetus for the merger was Bill 136; we were one of the targeted areas. Other people decided to be pre-emptive, that our strength was in unity and that we should merge.”

Merger on the Horizon

Ed Thomas talks about merging different cultures in the lead-up to the merger of Locals 5 and 167, late 1990s.

Although Locals 5 and 167 had worked together during negotiations for decades, the forced amalgamations of the late 1990s were the impetus they needed to consider merging. It was clear to many civic workers that in order to thrive during this new era, a different approach and a new solidarity were needed.

In January 1997, the first of several meetings was held between Locals 5 and 167 to talk about merging the Locals. A merger committee was struck to deal with a wide range of issues. A by-law committee was struck soon afterwards. It included staff and activists from both locals, including Mary Lou Tanner, Carolyn Carter, Vicki Houston, Ed Thomas, Sid Gratton, and Phil Chabot.

Peter Wickett notes how both Local 5 and 167 members rose to the occasion and created a successful merger. 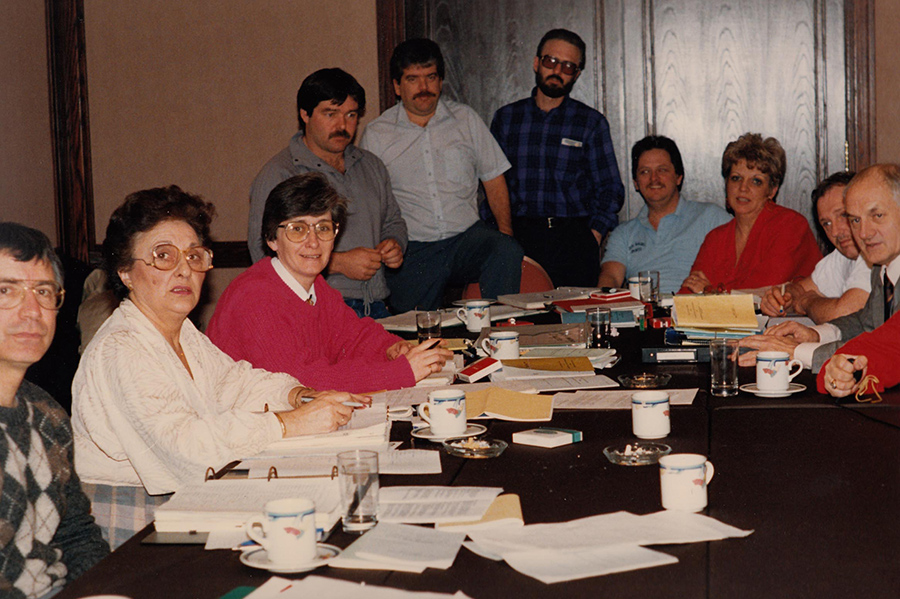 Negotiations with both Locals at the table, 1999. Courtesy of Ed Thomas.

“That’s when Harris started talking about amalgamation. We thought they might do it before the forced merger and so we approached Local 5 and all the smaller township locals. We invited them to the 167 offices and explained why it would be in our best interest to get ahead of this and unite before being forced to down the road — unity was needed to prevent us fighting amongst ourselves.” 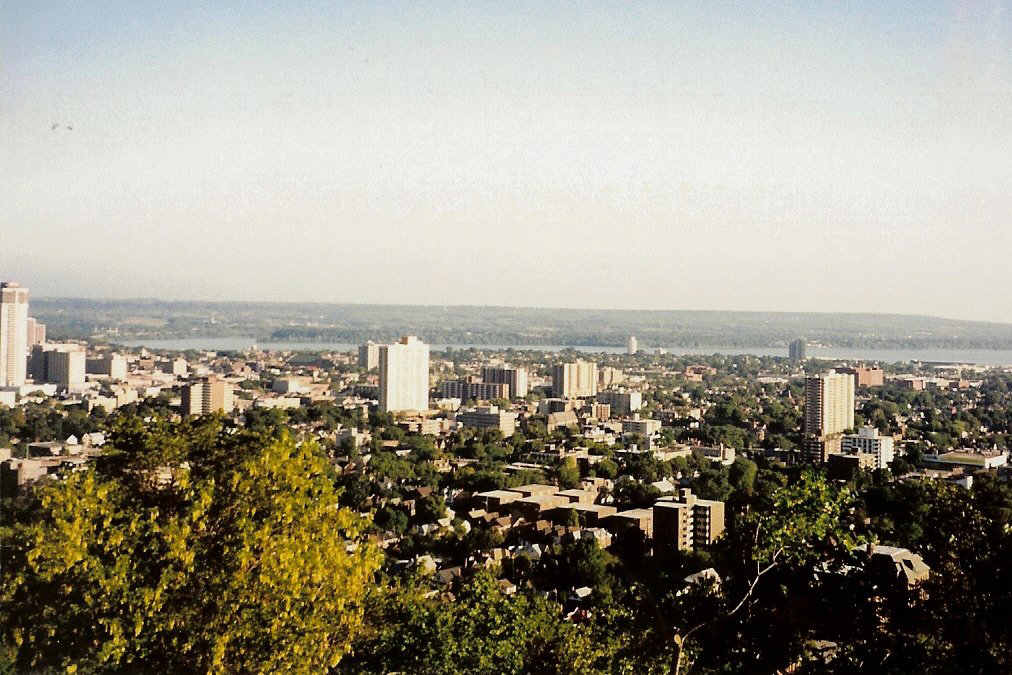 A view of the city of Hamilton from the escarpment, 1999. Courtesy of Ken Lund.

The first NDP government is elected in Ontario, with Bob Rae as the leader.

A prolonged economic recession begins, with the unemployment rate reaching a high of 11% by the middle of the decade.

The GST (Goods and Services Tax) is implemented. Nation-wide protests against the new tax are held on April 7 and 8.

In an attempt to deal with the effects of the recession, the Rae government introduces the Social Contract, which re-opens public-sector unions’ collective bargaining agreements and freezes workers’ wages. Workers are forced to take 12 days of unpaid leave a year, dubbed “Rae Days” by many Ontarians.

In Hamilton, the city tries to deal with its own budget shortfall by laying off civic workers for 15 Fridays during the year, and shuts down city hall for some of these Fridays.

As the recession deepens, Hamilton civic workers experience the largest temporary layoff yet: 900 workers are laid off for up to six weeks, and 64 full-time jobs are eliminated.

In November, there is an unsuccessful attempt by the Laborers’ International Union (LIU) Local 837 to raid Local 5.

Hamilton becomes the first major city in Canada to contract out water and wastewater treatment.

The Progressive Conservatives are elected in Ontario, with Mike Harris as leader.

As the Social Contract ends, most public-sector unions enter into new contract negotiations.

Ed Thomas finishes writing his book on the history of Local 5.

The Harris government begins implementing what it calls the Common Sense Revolution in an attempt to cut $8 billion from the provincial operating budget. It axes 10,600 civil service jobs, slashes welfare payments by one-fifth while instituting a workfare program for recipients, tries to force the closure of dozens of hospitals, and eliminates most school boards in the province.

This assault on workers and public services sparks massive demonstrations in 11 cities over the year — the Days of Action. In Hamilton, CUPE members set up picket lines at city hall, school board head offices, works yards, libraries, and social service offices. They also shut down local transit and impeded garbage collection.

A forced municipal amalgamation process begins. In Hamilton, the city and regions will merge to become the Regional Municipality of Hamilton-Wentworth.

With amalgamation looming, Locals 5 and 167, as well as other CUPE Locals, begin talking about merging their Locals.

CUPE creates two new diversity seats. One of them is occupied by Fred Loft, Local 5 President and activist.